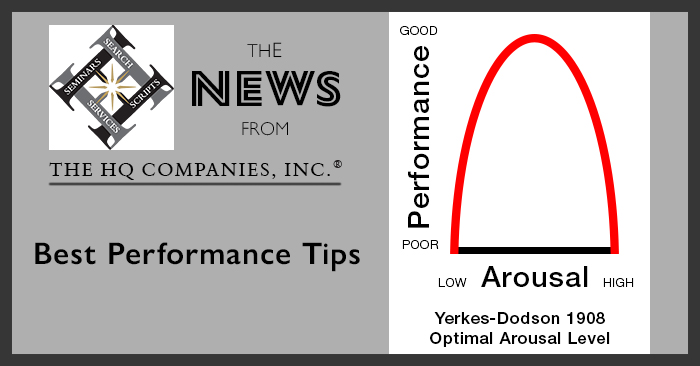 The 111-year old Yerkes-Dodson Law is NOT a law, it’s not even statistically significant, and yet it’s really quite useful for making what you want to happen actually occur.

The Yerkes-Dodson Law is a variation on Goldilocks and The Three Bears:

The problem with the Yerkes-Dodson Law is that “just right” varies from situation to situation, stimuli to stimuli, and individual to individual...so how do you figure out what the “just right” is for yourself in whatever you’re trying to achieve?

Ask yourself, “How am I feeling? How am I doing/performing right now in what I am trying to achieve?”

If you’re feeling sluggish, not “with it,” and/or saying disengaging statements like, “I don’t care about this X,” AND you’re under-performing, try spicing yourself up with some more colorful emotion. Get psyched. See/hear something motivational—a success story or a movie like Chariots of Fire. Use more colorful emotional words (hmm...is this why marketers and politicians use such words—they want to incite you to perform a certain or more action?).

However, if you’re feeling too angry, too upset, or too overcharged in any way AND you’re under-performing, try the reverse: do something that slows your emotions/reactions down: meditate, take deep breaths or a day off, etc. Substitute for words like “awful,” “horrible,” or “terrible,” the words “sad,” “unfortunate for me,” “not the best,” or “personally unfavorable” until you’re back to feeling motivated to achieve.

Note that being disengaged (the "I don't care about this X" stage) or being angry might be the “just right” reaction level to gain your best/optimal performance in certain situations.